Why Do Dogs Lick?

Why Do Dogs Lick? 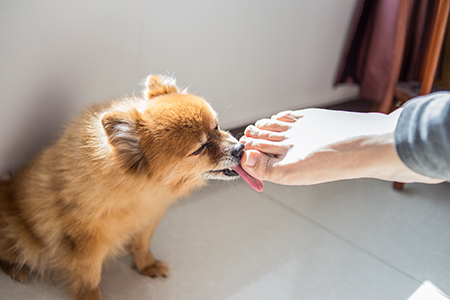 Is any exposed part of your body a target for a licking marathon by your dog? Many dogs seem so intent on licking your face, neck, arms, legs, hands and the favorite – feet and toes – that we may begin to question our hygiene. Some get you in a paw grip and won’t let go until their tongue has reached every space between every toe. Licking, as a means of grooming, is perfectly natural…it’s a dog’s version of taking a shower. But dogs also lick for reasons other than grooming. So perhaps this is a not so subtle doggie hint that we don’t smell too good, or we have bits of food all over ourselves and don’t realize it, or we’re salty, or we’re sad, or they just are being affectionate. So you ask – why do dogs lick their humans?

Licking is a Form of Communication

Basically, licking makes a statement about your pet’s mood, grooming habits, level of submission, signs of affection and instinct. Licking is a one of your dog’s inborn and natural forms of communication. Female dogs lick their puppies from the moment of birth as a means of grooming and cleaning, comforting and marking them with her scent. The mother’s instinctive licking communicates a number of messages to her pups which they continue to practice on themselves, another animals and on us as they mature.

Meeting and Greeting: Dogs that are lickers usually don’t limit their saliva painting to just their owners. A brief licking on the face and mouth is interpreted as showing friendliness, lack of aggression and fearlessness when dogs are introduced to new people and other dogs. (Word of caution – do not let a dog showing teeth and gums near your face – this is communicating the opposite of licking).

Instinctive Request for Food Sharing: Wild canines have a pack hierarchy, where the dominant males typically do the majority of the hunting. When the alpha males return, the subordinate pack members lick their mouths as a means of encouraging the hunters to share the food. In your household, your dog may lick your mouth as their way of checking out what you’ve been eating in the hopes you may share some with them. Or maybe just tasting leftovers on sloppy eaters. If you’ve been out, they probably are asking if you brought them a “doggy bag”.

Affection: Licking equals affection. Dogs lick as a signal that they are submissive to the person being licked, in essence regarding the “lickee” as a perceived pack leader or at least of a higher ranking. Love and respect are conveyed in a thorough licking session. It communicates that you are in charge, and they are comfortable with being a subordinate. As well, when a dog licks for affection, endorphins are released, and it makes the dog feel good. A long, intricate licking session can be very satisfying – to the dog that is.

Reading Your Mood: A dog’s communication skills are expressed by sniffing and licking. They have heightened senses in their noses and taste buds. So a quick “taste” could be an attempt to read your mood that day. When humans sweat, the eccrine and sebaceous glands send out little bits of information. That’s why dogs seem to be able to perceive when their humans are sad, scared, lonely, tired, hurt, or sick, as well as happy, excited, and energetic.

Marking Ownership: The same way a cat often rubs and twines around a person’s legs to leave their scent on you, a dog may lick as a way to mark you as theirs. That way, if another dog approaches you, the odor of your dog’s particular “eau de dog food breath” let’s them know you are already owned. (We say – better dog spit than the alternative means of marking).

Requesting Attention: A few licks to the face area may be a dog’s way of communicating that they are feeling scared, depressed, or lonely and are asking for attention or reassurance.

Some Humans Just Taste Good: A dog may be attracted to lick your skin, particularly arms and legs when skin is salty, or after application of lotions, or after cooking when fragrant vapors may settle on your exposed skin. To each his own we say!

Healing Instincts: Although it may not seem sanitary, dogs have a natural instinct to try to heal wounds on themselves and other pack members by licking them. So they often transfer that “licking makes it feel better” impulse to licking their human if they have a sore or injury. They are saying “let me fix it” the only way they know how.

When Licking Crosses the Line to Obsessive

When dogs lick, it’s important for you to understand what your puppy or dog may be trying to communicate. Whatever the reason, when a dog licks it usually has a positive connotation. However, if your dog engages in endless licking of the air or constant licking and nibbling parts of the body, this might indicate a possible compulsive disorder. However, there may be other physical or health related causes for non-stop licking, so a visit to Dr. Whitworth at Whitworth Animal Clinic, providing veterinary services to pets from Madison, Huntsville, and the surrounding Madison County areas, for an educated diagnosis is in order.