Left or Right Paw – Which Does Your Dog Prefer?

Left or Right Paw – Which Does Your Dog Prefer? 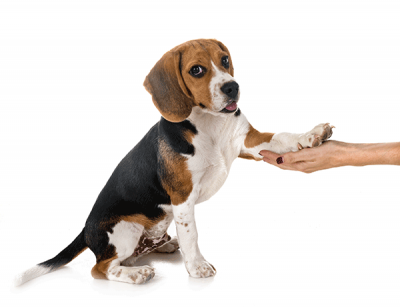 Left or right paw, which one does your dog prefer? One of the first things we learn as kids is whether we are left handed, right handed, or ambidextrous. Which hand is the most comfortable to manipulate and write with becomes almost immediately obvious, even before we have a pencil in our chubby little hands. Animal behavior studies show that, just like their human companions, our pets have a preference to which paw they prefer to use. Some people even speculate that, just like there are special traits associated with left handed people, your left pawed pet may have certain characteristics.

The two hemispheres of the mammal brain control movement on the opposite respective sides of the body, the right side of our brains governing movement on the left and vice versa. There is no hard evidence that paw preference influences pet behavior. However, since many creative processes take place on the right side of the brain and many logical processes occur on the left side, some people speculate that being left handed (or pawed, or hooved) may contribute to a more artistic nature, and other unique traits.

While more than 90% of people are right handed, studies performed in Turkey in 1991 showed that 50% of cats are right pawed, while 40% prefer their left and 10% appear to be ambidextrous, while a later University of Manchester study showed that dogs are split about half and half. Many scientists believe that, while hand or paw preference is most likely genetic, highly social species like humans that depend on cooperation for survival eventually develop a culture that values using one side over the other, which in turn shapes our genetics, resulting in the high population of right handed humans. While human lefties have to struggle with using right-handed scissors, your left handed pet seldom encounters the stresses of a right handed world.

Here are a few easy steps to help satisfy your curiosity about whether your dog prefers left or right paw:

Whitworth Animal Clinic is located in Madison, AL by Dr. Charles Whitworth. His furry friends come from all over Huntsville, Decatur, Athens, and Madison. He offers compete veterinary services for both cats and dogs which include wellness exams, dentistry, dermatology plus spay and neutering.