The Human Disease Pets Get Too Diabetes 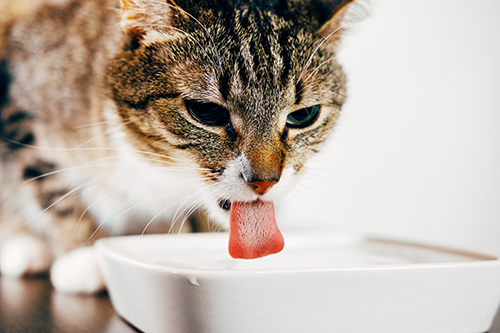 Is your pet’s water bowl empty every time you turn around? Does your dog seem to need to go out more often than usual, or can no longer make it through the day without an accident? Are you finding significantly more clumps in your cat’s litter box? Is your dog or cat eating more than usual but losing weight? Does your pet suddenly seem lethargic? Do you notice a strange, somewhat sweet smell to their breath? Have they developed a urinary tract infection for the first time, or vomit for no apparent reason? Is your cat walking strangely? These are symptoms that suggest that your pet could have diabetes. It is much more common than you think, and it cannot be prevented.

What Causes Diabetes in Dogs and Cats?

The general cause of diabetes is a lack of insulin production, similar to the human form of the disease. Ketones (the end-product of rapid or excessive fatty-acid breakdown) are formed in the blood of diabetics because of the inability to metabolize glucose. High levels of blood sugar lead to a condition called ketoacidosis, typically identified by acetone on the breath (smells a bit like nail polish remover); rapid, labored breathing; and, if not treated, can cause a diabetic coma.ulates so they can go off insulin. A change to a high-protein, low-carbohydrate diet helps this transition.

How Do We Manage Diabetes?

About 70% of felines require some form of insulin, while all diabetic dogs require insulin shots for their lifespan, with blood glucose monitoring an aspect of treatment, similar to humans. The goal is to keep your pet’s blood glucose levels within the normal range in order to reduce the potential for diabetic complications. The drug vasopressin is used to treat diabetes insipidus in dogs, administered by tablets given orally, or as eyedrops. Adequate water is an absolute necessity to prevent further organ damage. Weight management, including exercise and nutritious high protein food is also key to prolonged health.

Genetic predisposition, autoimmune disease, drug-induced diabetes, hyperthyroidism, chronic pancreatitis or abnormal protein deposits in the pancreas may also contribute to onset of the disease dependent on the species. Obesity, may also be a contributing factor, and may also limit responsiveness to insulin injections. Dogs suffer from two types of diabetes, and occurs more frequently these breeds – Australian Terriers, standard and miniature Schnauzers, Dachshunds, Poodles, German Shepherds, Golden Retrievers, Samoyeds and Keeshonds. Cats are susceptible to three categories of the disease – Burmese cats appear to be genetically predisposed, and male cats have double the risk of females. Neutered male cats over 10 years old and 15 pounds are the highest risk group. With poor glucose regulation, cats may exhibit muscle weakness, usually demonstrated by an unusual stance in the rear due to the cat walking on the hocks instead of up on the toes.

Diabetes Mellitus – Dogs and Cats: Insulin deficient diabetes is the most frequently diagnosed in dogs, called diabetes mellitus, or sugar diabetes. Type I diabetes in cats is comparable to Mellitus in dogs, and is the most severe type, but fortunately is not the most common. Inadequate production of insulin by the beta cells in the pancreas or inadequate response of the cells to insulin is the underlying cause. Normally insulin is secreted directly into the circulation, where it enables glucose to permeate the cell walls, where it is metabolized for energy. The body can’t utilize glucose without insulin, so blood sugar levels become elevated, and the cells don’t get the energy required for proper function. The animal may seem constantly hungry yet be losing weight. Excess glucose is then eliminated by the kidneys, resulting in frequent urination. In compensation for the increased urination, the animal’s water intake escalates, resulting in a condition termed polydipsia. However, polydipsia may be triggered by a variety of diseases, so increased thirst may not specifically indicate diabetes.

Diabetes Insipidus – Dogs: Diabetes insipidus is caused by a reduced amount of an antidiuretic hormone (ADH), which regulates water metabolism. When the levels of ADH are too low, the body can’t conserve water, releasing most of it into the urine. The result is also excessive thirst associated with polydipsia, and cataracts may develop.

Feline Type II and Transient Diabetes: Type II is the most common of the feline classifications of diabetes – the cat’s pancreas may make enough insulin but the body doesn’t use it properly. Some Type II diabetes cats require insulin, but blood glucose may be controlled in others with oral medications and dietary changes. Transient diabetes are type II cats who present as diabetics and require insulin initially, but over time, their system re-reg

Proper care can help your pet live a happy, healthy, active life. Dr. Whitworth will document a thorough history, perform a physical exam, and run blood and urine tests to discern a diagnosis in order to develop a treatment plan to manage your pet’s health. Daily treatment may seem overwhelming at first, but eventually becomes part of a daily routine.

Fill out my online form.